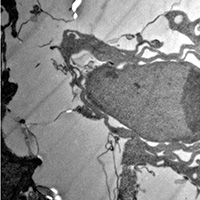 The Kölliker’s organ is a transient epithelial structure during cochlea development that gradually degenerates and disappears at postnatal 12-14 days (P12-14). While apoptosis has been shown to play an essential role in the degeneration of the Kölliker’s organ, the role of another programmed cell death, autophagy, remains unclear. In our study, autophagy markers including microtubule associated protein light chain 3-II (LC3-II), sequestosome 1 (SQSTM1/p62) and Beclin1 were detected in the supporting cells of the Kölliker’s organ through immunohistochemistry staining. In addition, Western blot and real-time PCR revealed a gradually decreased expression of LC3-II and an increased expression of p62 during early postnatal development. Compared to apoptosis markers that peaks between P7 and P10, autophagy flux peaked earlier at P1 and decreased from P1 to P14. By transmission electron microscopy, we observed representative autophagosome and autolysosome that packaged various organelles in the supporting cells of the Kölliker’s organ. During the degeneration, these organelles were digested via autophagy well ahead of the cellular apoptosis. These results suggest that autophagy plays an important role in transition and degeneration of the Kölliker’s organ prior to apoptosis during the early postnatal development.

The developing mammal cochleae have a special cluster of tightly packed, high columnar cells that locate in the modiolar side of inner hair cells (IHCs). These cells consist the Kölliker’s organ or the greater epithelial ridge (GER).1 The Kölliker’s organ matures since the outgrowth of cochlea duct from otocyst. In rodents, the Kölliker’s organ is one of the first identifiable structures in the inner ear from embryonic day 14 (E14) until postnatal day 12-14 (P12-14) when hearing has not been established.2 In this pre-hearing period, the Kölliker’s organ periodically releases adenosine 5’-triphosphate (ATP) that activates purinergic receptors of the surrounding supporting cells and depolarizes IHCs. Ca2+-dependent glutamate is then released from ribbon synapse and the action potentials of auditory never fibers are induced.3,4 Therefore, the Kölliker’s organ plays an essential role in retaining and refining the auditory neural connection in cochlear development. Besides that glycoproteins such as otogelin and tectorin were secreted by the Kölliker’s organ and participate the formation of the tectorial membrane,5 IHCs are reported to derive from the Kölliker’s organ.2 When the cochlea becomes sensitive to external sound, the Kölliker’s organ disappears in a medial-to-lateral and basal-toapical manner and eventually transformed into the inner sulcus region.6 Advance or delay of the Kölliker’s organ remodeling would result in deafness in adult mice.7,8 The mechanism underlying the degeneration of the Kölliker’s organ remains unknown. Programmed cell death plays a key role in developmental tissue remodeling and cell degeneration.9 Type-I cell death (also named apoptosis), characterized with chromatin agglutination, karyopyknosis, and nuclear fragmentation (apoptotic bodies), was required for the Kölliker’s organ degeneration,6,10 in particular between P5 and P10.6,8,10 However, the supporting cells have been already largely degenerated before the peak of the apoptotic time course. Type-II cell death, or autophagy, is characterized with double membrane vacuoles structure (autophagosomes). Autophagy can degrade proteins and organelles by autophagosomes packaging and autolysosome digesting.9 In 1977, abundant autophagic vacuoles containing organelles were first detected in the Kölliker’s organ in kittens.11 These structures were also found in explanted chicken otic vesicles, and autophagy-related genes (Atgs), Beclin-1, and LC3-II were all detected at the otocyst.12 Autophagic inhibition treatment in this model caused an abnormal morphology of the otic vesicles with abundant apoptotic cells, an imbalance of the cell cycle, and poor neurogenesis; all which support the hypothesis that autophagy is a necessary process in inner ear development.12 Moreover, Atg5-null mice showed a severe balance disorder, supporting that autophagy is important for rodent sense of balance.13

The whole autophagy process includes autophagy induction, complex nucleation, membrane elongation, autophagosome maturation and degradation after fusion with lysosome. Autophagy flux represents the dynamic process of autophagy. During this process, MAP1LC3/LC3 proteins (Atg8) are specifically cleaved at the C terminus by Atg4 and become LC3-I, which then conjugates to phosphatidylethanolamine to form LC3-II.10 P62, also known as SQSTM1/ sequestome 1, serves as a link between LC3 and ubiquitinated substrates, and is efficiently degraded by autophagy. Autophagy flux activation correlates with a decreased p62 level and increased LC3-II levels.

Sprague-Dawley (SD) rats at different developmental stages (E16, P1, P3, P5, P7, P10, P12 and P14) were bought from the Shanghai Laboratory Animal Center of the Chinese Academy of Sciences. All animal procedures followed the approved guidelines by the Institutional Authority for Laboratory Animal Care of Xinhua Hospital, School of Medicine, Shanghai Jiao Tong University. For all descriptions, P1 was defined as the day of birth.

After sacrificing, the cochleae of different developmental stages (E16, P1, P3, P5, P7, P10, P12 and P14, n=6) were collected and fixed in cold 4% paraformaldehyde for 1 h. After decalcification, the cochleae were dehydrated in a graded ethanol series and embedded in paraffin. Next, 3-μm sections was cut, and sections were deparaffinized, stained with 75% alum hematoxylin and 0.15% eosin, and dehydrated through a xylene and ethanol series.

Isolation of the Kölliker’s organ

Rats were anesthetized by rapid induction of hypothermia via immersion in ice for 4-5 min until loss of consciousness, quickly decapitated and had their temporal bones removed. The cochlea was extracted from the rat temporal bone, and cautiously removed in Hank’s balanced salt solution (GIBCO, 14175). The cochlea lateral bone wall was dissected away, the Kölliker’s organ was isolated by removing the rest of auditory epithelium and the spiral ganglions. The dissected cochlea was used for further analysis.

About 4 μg of RNA were extracted from the Kölliker’s organ of 12 animals using the TRIzol reagents (ThermoFisher Scientific, Boston, MA, USA; Invitrogen #15596026,) according to the manufacturer’s instructions. The cDNAs were obtained using the TaqMan Reverse Transcription Reagents (Takara Bio Inc., Kusatsu, Japan). The reaction was carried out in the Applied Biosystem (Foster City, CA, USA), using the SYBR green PCR mix (Takara Bio Inc.). Each DNA sample was evaluated in triplicates. LC3-II, P62, Beclin1, Bcl2 and Caspase3 were the target genes to assess and β-actin was used as the endogenous reference. The primers were listed on Table 1. The coefficient of variation (CV) values of the target genes and endogenous reference were calculated. The expression levels of mRNAs were calculated by the 2-DDCT method.

All rats received cardiac perfusion after anesthesia with ice-cold 2.5% glutaraldehyde (Sigma-Aldrich; G5882), then quickly dissected the cochlea. The cochleae were immediately fixed in 2.5% glutaraldehyde for 24 h and decalcified in 10% EDTA for several days. The samples were fixed in 1% osmic acid for 2 h, dehydrated with acetone, and embedded in 812 resin. The ultrathin sections were stained with alkaline lead citrate and uranyl acetate. The structure of each cochlea was observed under Philips CM-120 transmission electron microscope (Philips, Amsterdam, The Netherlands).

Data were expressed as mean ± SEM. Statistical analysis was conducted using Microsoft Excel and GraphPad Prism7 software. In order to compare protein expression level and gene expression in the organ, repeated measures ANOVA was used to isolate the significant effects of individual levels. Results were considered significant at P<0.05.

Morphology and immunohistochemistry of the Kölliker’s organ during postnatal development

Histological staining of the Kölliker’s organ in rats at E16, P1, P3, P5, P7, P10, P12 and P14 showed the concrete morphological transition in the middle turns (Figure 1). The high columnar cells in the Kölliker’s organ were gradually degenerated during development (from 4-5 layers of cells to 2-3 layers in P3-7), and eventually disappeared in P12-14. The most dramatic change happened in P7-10, during which the cells in the modiolar side of the Kölliker’s organ are the first to diminish and disappear, earlier than that in the hair cell side. This may be associated with formation and separation of the tectorial membrane along with cochlea development.

TEM of autophagic vacuole, autolysosomes and apoptotic bodies in the Kölliker’s organ during postnatal development

TEM was used to investigate autophagy in the Kölliker’s organ during postnatal development. Generally, autophagic vacuole has a double-membrane structure that encloses the cytoplasmic composition or organelles. Autolysosome contains lysosomal membrane proteins and enzymes, where autophagic vacuole fuses with lysosome. At P1, we identified several autophagic vacuoles and a large number of autolysosomes in the Kölliker’s organ supporting cells (Figure 3). At P5, the formation features of autophagosomes and autolysosomes was observed including nucleation, elongation and maturate (Figure 3, P5). At P14, there were also typical doublemembrane autophagosomes. Compa ring to other time points, there were significantly fewer autophagosomes and autolysosomes in the P14 group. In addition, there were also apoptotic features under TEM. We identified a typical apoptotic body at P5, and several cell wreckages at P10 (Figure 4). However, we did not identify any apoptotic characteristics at P1 and P3 (Figure 4).

In mammals, the development of the auditory system undergo a tremendous sequence of morphological and gene expression changes, with the Kölliker’s organ as one such example.14 Its degeneration in time-course program may decide auditory function. Here we explored the morphological and gene expression changes of the Kölliker’s organ from E16.5 to P14. Our work supported that autophagy may participate in the degeneration process during postnatal development.

We first observed abundant autophagic vacuoles containing organelles and proteins in supporting cells of the mammalian Kölliker’s organ by TEM (Figures 3 and 4). Moreover, a series of formation features of autophagosomes and autolysosomes were detected at P5 (Figure 3, P5). The main autophagy markers were clearly expressed in the period we observed. Autophagy is a conserved catabolic process and is considered to participate in many development processes.15 During this process, cells experience tremendous morphological changes, which require the degradation and recycling mechanisms of specific cellular components. 16-18 To our knowledge, our work is among the first to reveal that autophagy exists in the Kölliker’s organ and participates in its degeneration during this period.

Kölliker’s organ. Autophagy can provide an energy source for removing aggregated proteins and damaged organelles.15 It is conceivable that degeneration and remodeling process of supporting cells need more energy at earlier postnatal stages.

In our previous study, we have observed the morphological changes of the supporting cells in the Kölliker’s organ along the cochlea duct in an apex-to-base manner, and showed that the expression of apoptosis markers (Bcl-2, caspase-3, caspase-8 and caspase-9) in the sensory epithelium had a bell-shape curve during postnatal development with an expression summit at P3.6 Another study suggested the time course of apoptosis in the Kölliker’s organ was between P7 and P13.7 In the present study, our quantitative analysis also suggested the summit of apoptosis was between P7 and P10. Furthermore, the apoptotic body, the most widely accepted marker of apoptosis was significantly identified at P5 (Figure 4).

Based on our findings, we believed that apoptosis and autophagy may play different roles in the degeneration of the Kölliker’s organ. We compared the morphological characteristic and expression trend of autophagy/apoptosis markers. Quantitative experiments suggested that the expression summit of autophagy flux markers is around P1, well before the peak of the apoptosis markers (at P7 or P10). The immature supporting cell of the Kölliker’s organ have more abundant organelles, particularly endoplasmic reticulum (Figure 3, P1 and P5) than the matured ones. Shown by TEM images, various organelles were packaged by autophagosomes (Figure 3 P5 and P14). These organelles were eventually digested and degraded by mature autolysosomes. Organelles appeared to be degraded earlier than the apoptosis of the supporting cells. Mild autophagy activity could maintain cell homeostasis and excessive autophagy activity, including the high autophagy flux at early postnatal stage, may directly lead to type-II cell death (autophagic death).9 On the other hand, autophagic catabolic process produces amino acids, fatty acids and nucleotides by recycling intracellular components, which can be reused in ATP generation. 21 Higher-level and earlier autophagy may also supply the needed energy that facilitate the apoptotic process.9 Additional studies are required to uncover the in-depth relationships between postnatal apoptosis and autophagy of the Kölliker’s organ, as well as their contributions to cochlear development.

is an Open Access, peer-reviewed journal published by PAGEPress®, Pavia, Italy. All credits and honors to PKP for their OJS.